Is the aftermath of the most recent gun massacre in the US any different from those before? Many hope so due to the fact that the dead were mostly little kids of the ages of 5-7; it seems such an unacceptable atrocity that even the gun lobby would realise the need for change. Right? I doubt it. But it doesn’t mean no progress can be made. [this post updated with DailyBeast poll link under opinions 23/12/2012]. 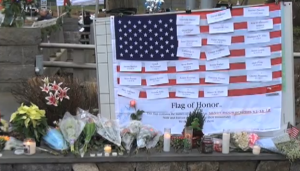 Every massacre brings a new angle on the way innocents can be slaughtered: this time it’s high school students, this time it’s in a university, … now it’s small kids. If we try to be objective, I doubt if we can say that the killing of any of the students at Virgina Tech, or any of those at Columbine, or the 20 kids, teenagers and adults in the 1984 California McDonalds massacre were any less awful. Is the killing of a mother worse than the killing of her 5 year old child? What if it’s both parents? The danger is becoming inured to ever greater horrors, in the way we know soldiers at war do.

The current post-massacre ‘debate’ seems doomed to play out in the same way all the others have: a stand-off between various types of progressives and hardliners. It seems unlikely that anything more than the smallest changes might be proposed and passed in Congress (e.g. reduction in size of magazines). To get an idea of the mutually incompatible positions in the current debate:

I recommend readers to peruse the last link above.

One does have to wonder about the mental capabilities of the NRA hardliners (which is not every NRA member I realise): do they not realise that putting a gun in reach of the teachers of Sandy Hook Elementary means putting a gun in reach of every teacher in the nation? And then every hairdresser, every bank-clerk, every news-seller, every shop assistant…. in fact everyone while at work. We can reasonably assume that such a vast increase in gun presence would enable even more mentally unstable or just plain malicious people to kill those  around them. Result: more massacres, not fewer.

Amy Goodman’s view is, as any US citizen knows, about as far away from today’s reality as one can get. It may be right, but it ain’t useful, at least not without deconstructing the debate in some way.

The debate within the US is harder

One of the difficulties for nearly everyone outside the US (and a small number of other highly weaponised, lawless countries) is that the US debate seems nearly incomprehensible because it is so far from what seems common sense elsewhere. In other countries the starting point is very low gun ownership per capita, particularly of either concealable or military weapons. So when a mass killing does occur – an extremely rare event (e.g. 35 dead in Port Arthur, Australia, 1996; 17 victims in Dunblane, Scotland, 1996) – the legislative response has been swift and effective.

The kind of gun debate people in other countries have is: should the police be routinely armed? (Australia’s are; British police are not). But it doesn’t mean that us sensible people outside the US would be any better at having the debate in the US. Everyone in the world could have more or less the same relatively civilised discussion as in say, Australia, if the starting point were living in a country with hardly any guns, and serious obstacles to getting one. In other words, any place with no pervasive gun culture.

That sadly is not the US. The debate takes place in a highly weaponised place where nearly every adult has a gun, many have more than one, and assault rifles can easily be bought. Look at the facts above: 270 million weapons among the US civilian population.

What does this mean? It means that some perfectly ‘normal’ mothers and fathers think that is is reasonable to own one or more guns for defensive purposes. Many gun owners privately assess the overall danger posed by the weaponised society and go and buy their own weapons, even though their first choice would be that no-one had any guns.

These people we can categorise as ‘contingent’ gun owners

Other mums and dads make a different analysis and decide that guns won’t help them – since they have no real training, don’t routinely use guns, are worried about accidents in the home, and think that producing a gun when faced with a gun is more likely to make the other guy shoot.

These people are contingent gun non-owners.

Making a debate on guns possible

Then we have the hardliners: these are people who believe in principle that anyone and everyone has a right and a need to be armed. They mostly seem to understand the world as a lawless place in principle, regardless of the evidence, and therefore have an absolutist stance. From here they are generally incapable of compromising. Since these people, like all ideologues, more or less ignore the current facts, nothing that happens in reality changes their position – not even the massacre of 20 6 and 7 year old kids. The only changes they will advocate are more guns, as evidenced by the NRA reaction to the Connecticut massacre.

Conclusion #1: understand the existence of ideological versus contingent positions, and exclude ideologues.

This may appear anti-democratic, and it is. But it can’t be avoided. Any discussion that includes ideologues will be hijacked and derailed. And since everyone knows their uncompromising stance, it’s not useful to include them anyway. It’s the same reason creationists are not invited to discussions on how to design an evolutionary biology curriculum.

So how do we exclude ideological gun supporters? It might not be that easy, since they love to turn up and make noise, whether at rallies, on TV, or as part of the vociferous NRA lobbying activities. But one way they can be filtered is to correctly frame the debate with respect to rights:

Ok, it might not be as easy as that, but ways have to be found to remove the ideologues, because part of their mission is to destroy what would otherwise be effective debate, since effective debates can lead to actual progress.

Making a debate on guns successful

What’s the next step? The problem of being in a country awash with guns doesn’t go away. So the next step is to frame the debate correctly. One key realisation is that reform would have to happen in steps, and that it is a major challenge to work out what the steps are, and in what order they should be taken to arrive at a better society. As a concomitant, it must in principle be true that after each step (some small gun control initiative), individual citizens are not in any greater danger than before (i.e. do no harm, as doctors say). It must also be true that over time, there are measurable positive outcomes.

Conclusion #2: the debate must be conceived in terms of small steps agreed by both sides

The Nuclear non-proliferation Treaty (NPT) is another example of at least partial success that required removing ideological positions and proceeding in steps.

My overall conclusion is that until the gun problem in the US is cleared of ideologues, and framed as a disarmament problem, no progress can be made. I don’t think it is impossible, because there is not just one ‘debate’, there are myriad small debates, going on in TV studios, blogs, and in town halls and parliaments. It just takes some of these to follow the two conclusions above.

1 thought on “Gun control: a debate in need of framing”