This is the first in an occasional series about the guitar, mainly centred on great players, or at least players I happen to like. I will restrict the series to people I have actually seen live… mostly….

I’ll start with Clapton and Beck, because I saw them at the O2 earlier this year (2010) in their ‘together and apart’ billing.

I have been a Clapton fan since first discovering him in a record sale in about 1980 as a schoolboy. I was not old enough to be seeing him in the 60s and 70s, but made up for it by listening to all of the classic albums until the stylus came through the other side, and like many others was mesmerised by the original Crossroads, Layla and other classics. I saw him in 1983 and 1990 or so, both times in Brisbane, and then again this year. The biography ‘Survivor’ said he was mainly drunk in the 80’s (Pete Townsend’s fault apparently)… if that’s true, I must start drinking more while I have my guitar plugged in… 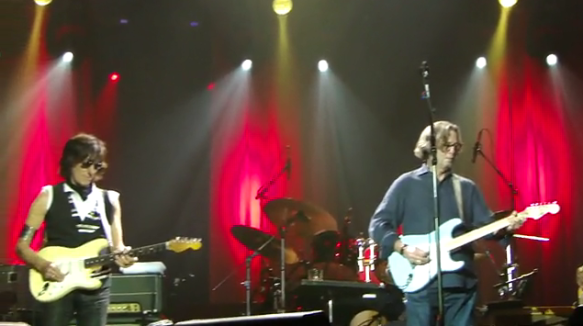 The shot above is the two of them playing … Moon River! Eric treated Jeff more or less as his lead guitarist for the songs they were on stage together.