On 8 November 2016, a reality show celebrity and business man with no political experience of any kind became US President Elect, against all expectation. Earlier that year, on June 23 2016, the UK voted to leave the EU, against even the expectations of those vociferously running the ‘leave’ campaigns. These events need some explaining.

Let’s have a look at Trump first. There’s a prevailing view that people who voted for him are essentially racist, misogynist, xenophobic, Islamophobic and generally nasty. Internet memes such as this one make fun of this. 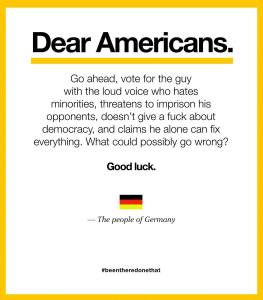 I laughed too. And then, on 8 November, Donald Trump won the election.